The following sections outline the major components and issues regarding how Richmond traffic signals work and related operations issues:

Traffic Signal Equipment
Traffic signals are quite costly. A modern traffic signal can cost up to $350,000 which

The Controller, the signal’s brain, is a specialized computer that controls the selection and duration of displays for conflicting traffic movements by continuously analyzing intersection traffic registered by vehicle detectors and pedestrian pushbuttons.

Detectors are devices for indicating the presence and passage of vehicles. In Richmond, they primarily consist of wire loops cut into the pavement approaching the stop line at every intersection. They are activated by the change of electrical inductance caused by a metal mass (vehicle, bicycle, etc.) passing or standing over the wire loop. Richmond also uses video detection cameras that use imaging recognition technology to detect vehicle.

Signal Faces are part of a signal head that control traffic for specific movements in a single direction and consist of one or more signal sections. These usually include solid red, yellow, and green lights and/or green/yellow turn arrows. A Signal Head can contain one or more signal faces.

Data communications between each intersection controller and the central traffic computers are essential for monitoring/controlling the traffic signal’s operation and updating the controller's database.

Solid Red, Yellow and Green Lights
We’ll assume there’s no need to outline the meaning of these indications.

Flashing Red
As stated in Part 3 of the

British Columbia Motor Vehicle Act, when a red lens is illuminated with rapid intermittent red flashes, a driver shall stop before entering the crosswalk on the near side of the intersection. A driver must stop and yield to other vehicles and pedestrians subject to the rules applicable to a four-way stop controlled intersection.

Flashing Yellow
When a yellow lens is illuminated with rapid intermittent yellow flashes, a driver may proceed through the intersection or past the signal only with caution. Alternating flashing yellow lights are seen at special pedestrian crosswalks and are activated by pedestrians to warn drivers of pedestrians in the crosswalk.

Solid White Bar
This indication is a special phase for transit vehicles and is seen above the red light. When the illuminated white bar is on, transit vehicles may proceed through the intersection before other traffic. This operation is seen northbound on Russ Baker Way and Miller Road on Sea Island and westbound on Steveston Highway at Highway 99 (southbound ramp).

Digital Countdown Timers
Richmond uses a digital countdown timer to inform side street motorists of the number of seconds remaining in the walk and don’t walk sequence. For more information, see Signal Devices.

Pedestrian Signal Indications
Pedestrian signal indications consist of “Walking Person” and “Hand” symbols. To cross, simply push the button and the signal will stop vehicles on the perpendicular street and provide a sequence for pedestrians to cross. 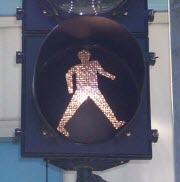 When the “Walking Person” light is displayed

When the “Flashing Hand” light is displayed 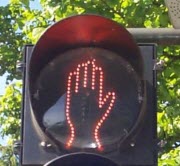 When the “Solid Hand” light is displayed

Protected/Prohibited Left Turn Signals
With this operation, left turn lanes have dedicated Red/Yellow/Green Arrow signal indications that are separate from the parallel through movement signal indications.  Motorists can only turn left on the “solid” (protected) left arrow and cannot proceed on the parallel through green light (prohibited). This operation is used when a combination of vehicle approach speeds, intersection widths and other intersection factors are such that left turns cannot be made as safely without the protection of an arrow each cycle. The left arrow must activate for one vehicle 24 hours per day, which results in longer signal cycle lengths and increased delay for all intersection traffic, particularly during off-peak traffic conditions.

Protected/Permissive Left Turn Signals with Left Turn Lanes
This is the most common left turn arrow operation in Richmond.  Left turn lanes share the same Red/Yellow/Green signal indications with the parallel through movement. A “flashing” (protected) left turn arrow is activated when a queue of approximately four vehicles are detected in the left lane. During the display of the solid green ball, left turns can be made (permissive) when there are adequate gaps in opposing traffic to complete left turns safely. This type of left turn phasing is designed to help minimize delay to all intersection users by allowing vehicles to turn on the green ball after opposing traffic has cleared. By not having a protected left only phase each cycle, motorists do not have to wait to turn left even when there is no opposing traffic, a situation that often occurs during periods of low traffic volumes. These left arrows are turned off by computer control when traffic volumes are low, and sometimes during peak traffic conditions where low volume left arrows can interrupt the opposing direction’s signal synchronization.

Protected/Permissive Left Turn Signals without Left Turn Lanes
This is the same operation as above except at intersections without left turn lanes, where both through and left traffic use the same lane. Since both through and left traffic share the same lane, opposing directions cannot receive a left turn arrow simultaneously. To address this problem, Richmond developed a system called “swap-logic”. The system works as follows:

These arrows are turned off by computer control when traffic volumes are low. During peak hours when there is heavy traffic in one direction, the left arrow is usually needed each cycle to clear traffic in that direction. In these cases, the opposing direction arrow is turned off to favour the peak flow direction.

Traffic Signal Pre-emption
The transfer of signal control to a special priority signal operation is called pre-emption. To obtain the required priority light sequence as soon as possible, other signal phases can be abbreviated or skipped. In Richmond, there are three types of pre-emption: Railway, Emergency Vehicle and Transit.

Railway Pre-emption
Active at all traffic signals along Shell Road and initiated when a train passes over switches located on the tracks ahead of the railway crossing. The purpose of railway pre-emption is to clear the tracks of vehicle/pedestrian traffic and set the direction crossing the tracks to a red light before the train arrives.

Emergency Vehicle Pre-emption
Used for Fire-Rescue vehicles. Richmond uses a Route Pre-emption System where commands are sent from the central traffic computers to traffic signals (along pre-determined travel routes) instructing them to change to a specific green light sequence to favour an approaching Fire-Rescue vehicle.

Transit Priority
Used on the Great Canadian Way bus corridor in Richmond. Busses are equipped with GPS hardware and other electronics. A transit priority (green light) request is issued by this on-board equipment to compatible hardware installed at specific traffic signals.

Signal Timing
Traffic signals in Richmond utilize vehicle detectors on all approach lanes and are designed and programmed to efficiently adjust the available green time on the basis of changing traffic demand.

Richmond traffic signals apply several different signal timing settings over a 24 hour period to respond to varying traffic conditions. The hierarchy of operations are described below.

Rest in Last Green Movement Served (Pedestrian Don’t Walk Light On)
This operation is typically used between midnight and 7:00 am at intersections with generally balanced traffic volume in perpendicular directions. The traffic signal will rest in the last green light served until a vehicle or pedestrian is detected in the perpendicular direction.

Rest in Main Street Green (Pedestrian Walk Light On)
This operation is typically used during daytime off-peak and evening hours at intersections with a primary main street. The traffic signal will rest green until a vehicle or pedestrian is detected on the side street. Once the side street vehicle and pedestrian traffic has been served, the signal automatically reverts back to a green light and walk light on the main street. The walk light is activated to reduce the amount the signal cycles by holding the light longer on the main street. The cycle length constantly varies at each intersection with this operation since there is no signal timing link to other signals.

Signal Coordination on Main Street (Pedestrian Walk Light On)
This operation is typically used during AM and PM peak periods at most intersections in Richmond, and also in off-peak hours in heavily travelled corridors. The main street green light timing is co-ordinated with adjacent signals in the predominant traffic flow direction. Once the side street vehicle and pedestrian traffic has been served, the signal automatically reverts back to a green light and walk light on the main street. All signals operating signal coordination must operate on the same cycle length.

Sometimes the button is pushed after the light is already green in the desired crossing direction and there is not enough time for the signal controller to activate the walk phase that cycle. The walk light will then come on the next cycle.

Co-ordination of Traffic Signals
The goal of co-ordination is to get the greatest number of vehicles through the system with the fewest stops. It would be ideal if every vehicle entering the system could proceed through the system without stopping but this is not mathematically possible, even in well-spaced technologically advanced systems. Therefore, in signal co-ordination, the busiest traffic movements are given precedence over the lesser traffic movements. Co-ordination cycle lengths range from 80 to 120 seconds in order to adequately accommodate the many left turn phases and long pedestrian crosswalk clearance time required.

Traffic signals staff are constantly monitoring traffic volumes at signalized intersections and this information is used to determine optimum signal timing parameters to help traffic flow with less delay. How well traffic flows along a street depends on several factors:

Many drivers ask why they have to wait so long for a signal to change particularly when waiting to enter a major arterial street from a side street. It can be even more frustrating when no traffic can be seen on the arterial. To allow the co-ordination of the arterial, the side street must wait until the main traffic movement on the arterial has gone through the intersection. It is possible that the arterial traffic can’t be seen immediately, but will soon be passing through the intersection. Major co-ordinated arterials in the City include Russ Baker Way, Steveston Highway and Westminster Highway.

The co-ordination of traffic signals to facilitate smooth traffic flow (progressed movement) along a street is a proven technique. The quality of flow along a street is basically a function of the spacing of the signals along the street, the prevailing speed of traffic on the street and the traffic signal cycle length. Vehicles starting out straight (i.e., not making a turn from a side street) at a major intersection at the beginning of a green will experience less stops and delays.

The signal timing parameters are adjusted at various times of the day to accommodate the changing traffic patterns. However, there are times when the amount of traffic exceeds the capacity of the roadway. When this happens, backups and delays are inevitable. Flexible signal timing operation helps to efficiently use the available street capacity.