Traffic signals staff receive many questions about the operation of traffic signals. A few of the more common questions under the following general categories are listed below.

If you have further questions, please feel free to submit them by email to Traffic Signals at trafsig@richmond.ca. 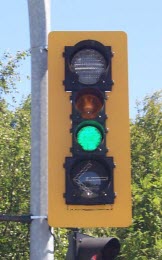 Installation Considerations
Before installing a traffic signal, the following criteria are evaluated:

For more on traffic signals, see How Traffic Signals Work.

Pedestrian Signal Indications
Why is the duration of a walk light so short?
The walk light indicates when pedestrians are permitted to begin crossing. In Richmond, the standard duration of the walk light is eight seconds but for some directions it can be greater when different modes of signal operation are in effect.

The walk light is followed by an orange flashing hand "pedestrian clearance" indication. The clearance duration is timed, based on a specific pedestrian walking speed to cross the entire intersection. If a pedestrian steps off the curb and begins crossing just as the hand starts flashing, there is adequate time to finish crossing. If a pedestrian starts crossing after the hand indication starts flashing, there may not be adequate time to cross safely.

Do I have to press the button many times to get a walk light? 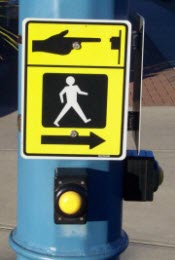 Some times I press the button and get a walk light very quickly. At other times, I press the button and have to wait noticeably longer. Why?
In order to minimize stops and reduce vehicle delays on high traffic corridors, many traffic signals are co-ordinated with adjacent traffic signals. The pedestrian must then wait for the point in the cycle that the walk light is displayed. The wait time at co-ordinated traffic signals depends on when the button is activated during the signal cycle and could range from a few seconds to up to more than a minute.

Vehicle Detection
How are vehicles detected at traffic signals?
There are different technologies for detecting vehicles – microwave sensors, cameras, and the most common technique, an inductive loop, which is used in Richmond. An inductive loop is simply a coil of wire embedded in the road's pavement that acts somewhat like a magnet. When a vehicle drives over or stops on the loop, metal mass in the vehicle changes the characteristics of the magnetic field, electronic equipment detects the change and tells the signal controller that a vehicle is present.

To install a loop, a saw-cut is made in the pavement in a rectangular or square pattern, electrical wire is laid in the groove and sealed with a tar compound. You can often see the loops cut in the pavement because the compound is visible. In some cases, loops are installed before a new layer of asphalt is placed, and thus are not visible. Richmond loop detectors are sensitive enough to detect motorcycles and bicycles. However, because of the low metal mass of bicycles, they must be placed very close to the edge of the detector.

Why does the signal turn green for a side street when no one is there?
The most common reason that a signal turns green for a side street when there is no one waiting is that a vehicle detector or pedestrian pushbutton has had a temporary failure, or is broken from road or utility construction. When a detector loop has failed, the controller interprets this as if a vehicle was constantly parked on the detector, which causes the green light to stay on longer. This is most noticeable at night when traffic volumes are low causing the perception the signal is slow to react. Detector failures are monitored by the central traffic control computers and are generally short-term problems.

Left Turn Arrows
How do Richmond’s left turn arrows work?
Protected-permissive left turn signals are the most common in Richmond. Left turn lanes share the same Red/Yellow/Green signal indications with the parallel through movement. A “flashing” left turn arrow is activated when a queue of four or more vehicles are detected in the left lane. This type of left turn phasing is designed to minimize delay to all intersection traffic since left turns can also be made during gaps in opposing traffic when the green ball is displayed. These left arrows are turned off by the traffic computers when traffic volumes are low and adequate gaps exists to turn left.

Why do some left-turn arrows allow vehicles to turn only when the green arrow is displayed and not during the through phase?
This type of left-turn phase, known as "protected-prohibited" is designed to separate left-turning traffic from opposing through traffic. Even if an acceptable gap exists in the oncoming through traffic, vehicles are required to wait for the green arrow to turn left.  This operation is used when a combination of vehicle approach speeds, intersection widths and other intersection factors are such that left turns cannot be made safely without the protection of an arrow each cycle. Protected-prohibited left turns are in operation at intersections such as Garden City Road and Westminster Highway, Russ Baker Way and Miller Road and Garden City Road and Sea Island Way.

Signal Timing
Are traffic signals in Richmond co-ordinated? Why can’t the signals be timed so that I can arrive at more green lights?
Yes, traffic signals in the City are co-ordinated in peak hours to minimize stops and delays. Ideal or “perfect” signal co-ordination is difficult to achieve due to varying traffic speeds, congestion, the distance between signals and the need to vary the amount of green time at each intersection.

“Perfect” co-ordination for one direction of travel often results in frequent stops and delays for the other direction.  When traffic volumes are relatively balanced, the traffic signals are timed so that the “reds” and “greens” are balanced in both directions.  When the traffic flow is heavier in one direction, the signals are co-ordinated to favour the highest volume of vehicles.

Do the traffic signals operate the same way all day?
Traffic signals in Richmond utilize four different operational levels over a 24 hour period. To respond to varying traffic volume levels, many intersections change their operational parameters more than 10 times per day.

What are Special Crosswalks? 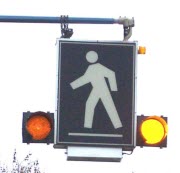 Special Crosswalks consist of overhead illuminated signs with downward lighting and pedestrian pushbutton activated amber flashers.  They are installed to increase motorists’ awareness of the presence of a pedestrian by improving their visibility to approaching traffic. For more information, see Special Crosswalks.

What are the audible sounds for at some intersections?
Audible/Accessible pedestrian signals are installed at selected traffic signals frequented by the visually impaired and provide audible sounds to indicate an active walk light. For more information on Audible Devices, see Signal Devices.

What do I do if all of the signal indications are blank?
When a traffic signal has gone dark due to power failure, it is considered to function the same as a four-way stop controlled intersection. A driver must stop and yield according to the four-way stop rules before entering the intersection.

For information on power outages in the Lower Mainland, see the BC Hydro website.

Why are new traffic signals “flashing” when initially activated?
Flashing red/yellow operation is generally used at new traffic signals to draw attention to the new device. Regular users of the roadway are conditioned to a specific intersection traffic control, thus flashing operation is used for one week before the new signal control is set to normal operation. During this warning period the motorist on the main street will encounter a yellow flashing indication and a motorist on the side street will see a red flashing indication.