Find out about upcoming bike events in Richmond and find resources that can make cycling experiences even better.

In 2001, the City of Richmond and the Richmond Community Cycling Committee jointly staged the inaugural "Island City, by Bike" tour - a free community event that offers guided cycling tours of some of the City's bike routes. The annual event occurs each June during Bike Month. The 2021 event originally scheduled for June 13, 2021 has been postponed until further notice. Bike to Work Week is a regional initiative inaugurated in 2007. The event aims to reward existing cyclists and encourage new cyclists to try cycling to work and to continue cycling after the event. Participants are encouraged to log trips in order to be entered to win daily prizes. Register today at btww.ca.

Commuter Challenge
The Commuter Challenge is an annual competition held during Environment Week (first week of June) between Canadian cities to see which one can cut its air pollution the most by using active and/or sustainable modes of transportation such as walking, jogging, cycling, in-line skating, teleworking and/or taking the bus or carpooling. Visit the national Commuter Challenge website to find out how to participate locally and be counted.

Cycling Resources
Government Resources
Ministry of Transportation & Infrastructure has jurisdiction over provincial roadways and highways, some of which are located in Richmond. The Ministry's website has cycling information that includes provincial cycling policy and Motor Vehicle Act links plus the schedule of the George Massey Tunnel bike shuttle.

BC Ferries connects the Mainland with the Gulf Islands and Vancouver Island, as well as with the Sunshine Coast. Bicycles are accepted on all ferries for an additional fee. For schedule and fare information, contact BC Ferries (1-888-BCFERRY or 1-888-223-3779).

Insurance Corporation of BC (ICBC) works with local governments to improve road safety for all users. Resources include:

TransLink is the regional transportation authority and is responsible for bus service in the region, the SeaBus to the North Shore and the SkyTrain. Bike services include bus bike racks and bike lockers at SkyTrain stations and Park and Ride lots. For schedule and fare information, contact TransLink Customer Service (604-953-3333). TransLink has also developed the Regional Vancouver Cycling Map & Guide. 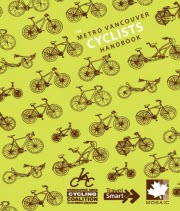 HUB: Your Cycling Connection is a registered non-profit organization formed to present a clear voice for transportation cycling in the Vancouver-Metro Vancouver area. HUB has a handbook for new cyclists that is available in five languages: English, simplified Chinese, Punjabi, Tagalog and Korean. The handbooks outline rules of the road, safety tips, helmet and bicycle fitting, and list resources to find out more about safe and enjoyable cycling.

Better Environmentally Sound Transportation (BEST) is a non-profit society that is committed to making communities healthier places to live by promoting sustainable transportation and land-use planning, and pedestrian, cycling and transit-oriented neighbourhoods.

The Great Trail contains information on the 22,000-kilometre long Trans Canada Trail. The website has further information (including maps) on BC's portion of the Trail, which travels from the Rockies in the east, through the Kootenays, the Okanagan, the Fraser Valley and the Metro Vancouver area to Victoria.

Bike Sense: The British Columbia Bicycle Operators Manual is a comprehensive guide to the rules of the road, bike handling, traffic skills and the enjoyment of cycling for life. Prepared by the Greater Victoria Cycling Coalition, Bike Sense provides information on traffic laws and riding strategies to help cyclists

understand their rights, responsibilities and how best to protect their own safety in traffic. The manual was written and reviewed by professional cycling skills instructors, cycling advocacy organizations, bicycle trained police officers and provincial authorities responsible for making and interpreting our traffic laws.

British Columbia Cycling Coalition is a non-profit society that represents the interests of cyclists provincially and seeks to secure their recognition in policy and programs affecting transportation cycling.

BC Randonneurs Cycling Club organizes rides in accordance to the rules of randonneur cycling, sometimes referred to as marathon cycling, which can be defined as fast long-distance cycling.

Vancouver Bicycle Club a recreational cycling club for all types of riders that offers road rides, mountain bike rides and both supported and unsupported tours.