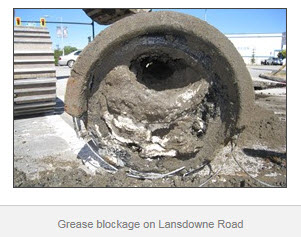 Grease. It’s a slippery mainstay of every kitchen. Whether it’s cooking oil, shortening, butter, lard or the drippings from meat, it’s supposed to stop things from sticking together. But when grease goes down the drain, something entirely different happens.

Pour grease down the sink and it quickly hardens into a congealed, gluey mess. The results? Clogged pipes, backed-up sewers, and expensive repairs. It doesn’t matter how much hot water or soap you pour down after it. Sooner or later it solidifies.

Grease often picks up other materials along the way, creating large solid chunks of muck that hurt our pipes and your wallet. The City of Richmond has some of the region’s most persistent issues with grease build up and spends $380,000 per year on grease issues. Metro Vancouver spends $2 million every year in the region to repair damage caused by grease. Imagine the cost to individual homeowners when pipes get blocked.

But there is a simple solution. Here’s what you need to know.

What Can’t Go Down the Drain

You Can Help Protect Our Pipes

When cooking at home, plan to properly dispose of fats and grease. If your recipe calls for skimming the fat off the top of a stock, soup or stew, you can collect the fat in a bowl or glass, and scrape it directly into your green bin. At the end of a meal, here’s how to clean greasy dishes in three simple steps:

Takeout meals can also leave a film of grease on your dishes. Since even small amounts of grease can lead to costly plumbing repairs, always wipe or scrape grease residue and put it in your green bin.

Wondering how to recycle deep fryer oil? Simply store the oil in a container and drop it off at the Richmond Recycling Depot.

Wipe it, Green Bin it 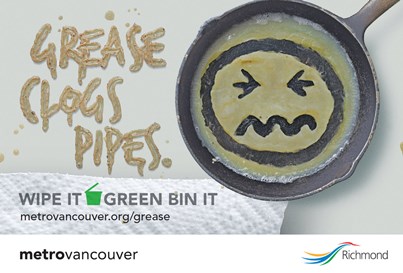 The City of Richmond is working with Metro Vancouver to educate residents and businesses about how to properly dispose of their kitchen oils and grease, which will reduce the amounts going into Richmond pipes.

The Wipe it, Green Bin it grease program is an active education campaign throughout Metro Vancouver. Metro Vancouver and its member municipalities spend over $2 million dollars every year to unblock sewage pipes and to repair or replace infrastructure impacted by grease.

The City of Richmond currently has a number of pilot programs under way in an effort to combat grease in our sewer system. Operations staffs are taking daily measurements and observations of grease build up to measure the results of these efforts.