Agriculture is an important part of Richmond's history.  Early settlers were attracted to Richmond by the fertile soils of Lulu and Sea Islands and the promise of agricultural productivity.  Over the years, Richmond has grown and evolved into a vibrant urban centre.  Despite the dramatic changes, a significant portion of Richmond's local area remains agricultural.  Today, agriculture forms an important part of the local and regional economy as well as a major land use in the city.

Agricultural Land Base
Approximately 4,993 ha (12,338 ac) of Richmond's land base, or 39% of the City, is within the Agricultural Land Reserve (ALR).  The total amount of area within the ALR and area zoned Agriculture outside of the ALR is approximately 5,563 ha (13,746 ac).  These figures do not include ALR boundaries on Sea Island.  The amount of land in the ALR has remained relatively stable in the last 30 years. 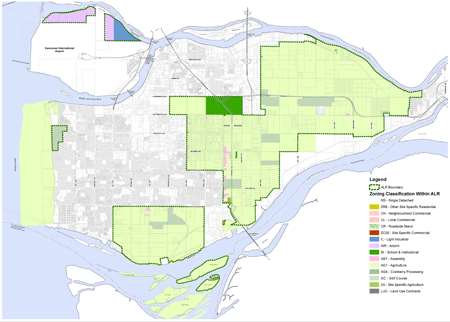 Much of Richmond's soils are organic, formed by fluvial (river) deposits of the Fraser River.  Drainage is a major issue in Richmond, where the groundwater table is high.  However, with improvements (mainly drainage), all of Richmond's ALR is considered to be prime agricultural land.

For further information on Agriculture in Richmond, please check out the latest Agricultural Hot Facts sheet.

For more information about Agriculture, the Food Security Agricultural Advisory Committee and land use policies in the ALR, please contact: