Improving Traffic Flow at City Centre Waterfront
Strategic Objectives of River Road Realignment
The realignment of River Road is a key component of the City Centre Area Plan in support of the vision for this area of improving public open space and access to the river by establishing and extending the Middle Arm Waterfront Park. The River Road right-of-way between Hollybridge Way and Gilbert Road has been closed to traffic and will be converted to public open space. The dyke, together with that section of the former River Road, will be raised as part of the City's dyke upgrade initiatives.

Temporary Nature of River Road Alignment
The realignment of River Road consists of a new temporary roadway immediately east of Gilbert Road and just south of the Dinsmore Bridge. This road transition is necessary to maintain network continuity and accommodate existing traffic flows in the interim. Ultimately, this temporary road connection will be replaced by a new four-lane arterial roadway along the former CP Rail corridor to the north, which is expected to be completed within the next five to seven years with a two-lane section between Gilbert Road and Cambie Road anticipated to begin construction in Fall 2018.

Future Road Network Plan (Map): the new River Road alignment and other key road network improvements that will be implemented in the next one to five years to support the anticipated growth development in the area are illustrated in this map and listed in the table below.

Update of City Centre Transportation Plan
The update of the City Centre Area Plan (CCAP) was completed in July 2008 with adoption of the Plan in 2009. In conjunction with the CCAP update, an update to the City Centre Transportation Plan (CCTP), first adopted in 1997, was a necessary complement and was completed in co-ordination with the CCAP in July 2008. The CCTP update builds upon the key objectives of the

1997 CCTP to foster a more balanced transportation system that emphasizes transit, cycling and walking as the preferred modes to meet future travel demand. The updated CCTP will be used as a guiding document defining in detail the transportation plan components, their phasing plans and funding mechanisms to achieve the vision and ultimate build-out of the city core area. 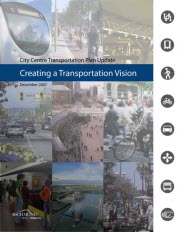 Sustainable mobility for a livable, appealing and viable downtown.

Phase 2 - Developing an Implementation Strategy
Phase 2 was the development of an implementation strategy that identified the requirements, priority and potential timing of transportation improvement projects that will build towards the Vision. This work was completed in Summer 2008 and incorporated into the

Questions?
If you have any questions about the City Centre Transportation Plan, please contact: