Known to most simply as a “crow,” the Northwestern Crow (Corvus caurinus) is a conspicuous, mid-sized, black bird with black legs. The stout, black bill is partially covered by bristle-like feathers surrounding the nostrils. Males and females look similar, but males are slightly larger. Juvenile birds look like adults, but lack the bluish iridescence of adult feathers. Foraging on the ground, the Northwestern Crow can walk or hop. Its flight is strong and direct, but crows are also capable of complex aerobatic maneuvers, and can soar on thermals. In fall and winter, large numbers of Northwestern Crows, flying in loose flocks, are often seen at dusk as they head to communal night roosts.

Northwestern Crows live along the Pacific coast from southern Alaska to northern Washington State. They are omnivores and scavengers. Natural food includes a wide range of inter-tidal invertebrates, especially clams, which they dig from mud with their bills, and then drop from a height onto a hard surface to break open. They also eat small mammals and the eggs and nestlings of other birds. They consume carrion, including sea mammals, seabirds and roadkill, and will pluck dead insects from car grills. They eat fruit, and in late summer feast on blackberries. They take advantage of gardens and poorly tended food waste, and will open inadequately closed garbage containers and tear into exposed plastic bags.

Northwestern Crows mate for life, and pair off during the breeding season to build a nest made of freshly picked sticks in a tree or shrub. The female lays 3 to 6 eggs, which she incubates for 18 to 20 days. The young leave the nest in 4 or 5 weeks, but remain dependent on their parents and follow them, begging loudly, until they learn to feed themselves.

In fall and winter, as dusk approaches, large, loose flocks of crows fly north and west from Richmond and southern Vancouver in what appears to be an endless stream. They are heading for their habitual night roost in the Still Creek area of Burnaby, near Willingdon Avenue and Highway 1, where between 3000 and 6000 birds will spend the night. It is thought they may be seeking security in numbers, that flocking makes them relatively safe from their main night time predators, Great Horned Owls.

History and Habitat in Richmond
Northwestern Crows are plentiful in Richmond, in part because the city was established in prime crow habitat. They are birds of the inter-tidal zone, living at the seashore and along the banks of the estuaries of major rivers. They prefer an inter-tidal habitat backed by forest, which provides ample food and nesting sites and shelter during inclement weather. Crows have had little trouble adapting to a growing coastal city, where a wide range of human food is also available in a habitat that although modified still retains enough trees and shrubs for nesting.

Conflict with People
Food
Northwestern Crows are very intelligent and are keenly aware of what is growing, and ripening within their territories. Their ability to swoop in and snatch, or at least take a few bites from, ready-to-pick garden fruits and vegetables is the reason scarecrows were invented. Unprotected crops, from back yards to corn fields, are bound to attract crows, but how much to invest in anti-bird measures depends on the scale of the farming operation and value of the vulnerable crop. For small plots and backyard gardens, wind-blown mobiles and chimes may act as a temporary deterrent, but crows may soon learn how to avoid or ignore them. For ground-level crops, netting designed to be strung above fruits is available at gardening stores.

Crows also know where french fries come from, and how to nab them. This is a learned behaviour, encouraged by intentional feeding. Once crows associate a seated, dining person as a potential food donor, they will lurk, hoping for a hand-out. They tend to keep their distance, watch carefully, and steal food that is unprotected. This habit will not go away until people stop intentionally or inadvertently sharing food with birds, which will probably never happen.

Garbage
Crows are also known to be garbage pickers, whose antics can result in trash strewn far and wide. Until the recent, near-universal adoption of hinge-lidded garbage bins, Northwestern Crows would descend on neighbourhoods on garbage day, knock off weakly attached garbage can lids or tear into curbside garbage bags, scattering the contents across roads and lawns.  Picnic areas and parks lacking bins that close completely are still scavenging sites for crows, with messy results.

Nests
Occasionally pedestrians are dive-bombed by crows, most often by parent birds defending a nest. This is always a temporary situation coinciding with the nesting season from March to May. Usually diving crows do no physical harm, not making contact, but the swooping can be alarming to the unprepared. A small umbrella is all it takes to ward away swooping crows. This behaviour only lasts a few weeks, thus it may be possible simply to detour around the nest for a short time. 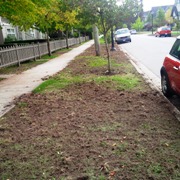 Extensive damage to lawns by insect-eating predators has recently become a problem in Richmond. The predators are seeking the larvae of European Chafer Beetles, an invasive, non-native species that infests lawns. The beetle first appeared in the Lower Mainland in 2001 and has spread throughout much of the Greater Vancouver area. Skunks and raccoons tear up sod in the dark of night in their quest for tasty larvae. During daylight Northwestern Crows will poke though the disturbed turf, searching for leftovers. Because they are seen doing this, they often are blamed for the bulk of the damage done by nocturnal mammals.

Noise
Northwestern Crows have harsh calls and can be noisy, especially when mobbing, a behaviour in which they gang up to harass predators such as hawks, eagles, owls, raccoons or domestic cats. Loud cawing will draw in additional crows, until there are large numbers flying at and around their enemy, who is usually taking shelter amid the branches of a tree. The raucous noise can go on for an hour or more, but eventually, their point made or their foe routed, the crows will leave.

Benefits
There is a beneficial side to Northwestern Crows. They are a natural part of the coastal ecosystem responsible for carrion removal, including dead birds and small mammals within neighbourhoods. Every chafer beetle larva they remove from a lawn is one less adult beetle to contribute to the infestation.