The Garden City Lands are an extraordinary 55.2 hectares (136.5 acres) of open space located within the Agricultural Land Reserve, in the heart of Richmond, between Westminster Highway, Alderbridge Way, Garden City Way and No. 4 Road. The Garden City Lands will become a major new community park with diverse uses, including urban agriculture, environmental preservation and interpretation, recreational and cultural uses. 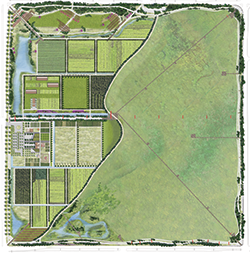 To review the Development Plan and an enlarged version of the Legacy Landscape Plan above, please see the following PDF document:

For more details about the above key components, visit the Garden City Lands Archive page.

The Perimeter Path
The 2.9 km long Perimeter Path is open to the public. The City has surfaced the path closer to the road with a compacted fine gravel permitting universally accessible surface.  Bikes welcome to use the paths as well. Please be aware of service and farm vehicles using the rougher interior path which runs parallel to the perimeter path. Dogs are permitted on the outside perimeter path until further notice. The City would like to remind the public to keep dogs on leash when walking the perimeter path.

As per ALC restrictions, the interior of the site is closed to public access. Please stay on the perimeter path.  Only City staff and KPU personnel are permitted within the site at this time.


Subject to City Council review and approval, the City will move forward with a formal Application to the Agricultural Land Commission (ALC). The City’s Application will request the ALC’s approval to proceed with the next phase of site improvements to permit public access to the entire site. Proposed improvements subject to ALC approval include expanded recreational opportunities and the infrastructure to support expanded public access onto the site. Meanwhile, the City is actively maintaining the extensive perimeter plantings installed in 2018 with weed control, mowing, mulching and watering.

KPU at the Garden City Lands
Kwantlen Polytechnic University’s (KPU) Sustainable Agriculture Farm Program operates a farm on a portion of the Lands the City has leased to KPU (approximately 2.7 ha).  This includes growing crops in the sustainably managed greenhouse and several hoop houses and cultivating the intensive market garden. A significant portion of their fields are under cover crop to nourish the soil and promote beneficial insect populations. As KPU’s capacity to manage the lease area increases, the City will support the expansion of the farm to the full 8 ha (20 acre) lease area.

Previously Completed Works
Since 2017, the following site improvements and activities were conducted on the Garden City Lands: 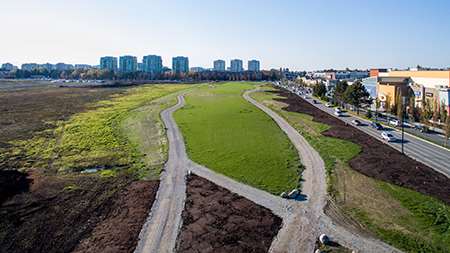 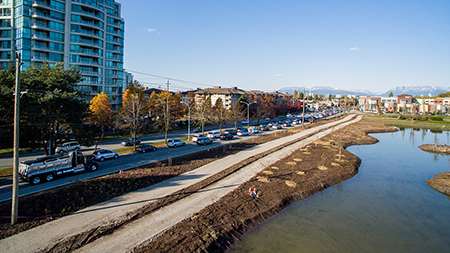 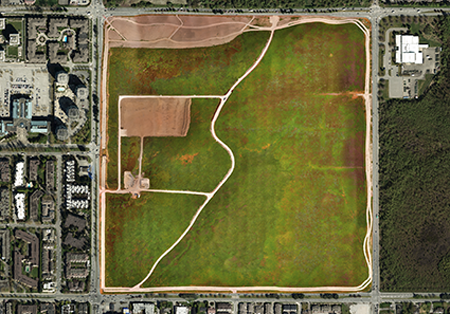 Press the play button and then the square button in the bottom, right-hand corner to watch the 2 minute Garden City Lands drone video in full screen HD. To move through the video more quickly, grab the "playhead" and drag it along the timeline.

Water and Ecological Resource Management
Implementation of the plan will be a multi-year process. The City commissioned a detailed water and ecological resource management study to guide the development and maintenance of the site.