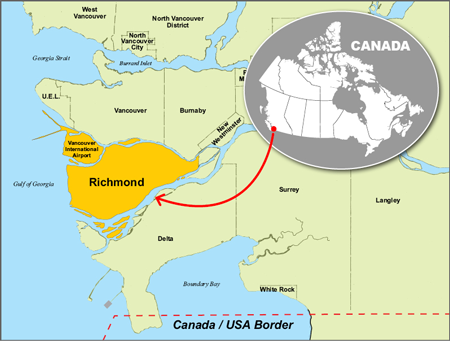 The City of Richmond's location in the Metro Vancouver map

Location
The City of Richmond is located on Canada's Pacific Coast in the province of British Columbia. Richmond is a unique island city, favourably located within Metro Vancouver in close proximity to downtown Vancouver and the U.S. border. It comprises a series of islands nested in the mouth of the Fraser River with the coastal mountain range as a backdrop. The islands include Sea Island, most of Lulu Island and 15 smaller islands.

Description
Population and Land Use
With a population last estimated at 230,584 people, Richmond is an ethnically-diverse, growing and dynamic urban centre with a unique mix of residential and commercial property, agricultural lands, industrial parks, waterways and natural areas. Richmond is situated where the Fraser River meets the Pacific Ocean.

The shores surrounding Richmond create an estuary border that provides habitat for fish and for migrating birds on the Pacific Flyway between the Arctic and South America.

Richmond has undergone enormous change over the last several decades, with significant growth in the early 1990s. Today, Richmond is a dynamic, multi-ethnic community. Much of the recent population growth has been made up of Asian immigrants. People of Chinese or South Asian ancestry represent more than 60 per cent of Richmond residents. Newcomers have contributed significantly to the growth of the small business and retail sectors and have added to the diversity and vibrancy of the city of Richmond.

City Management
Richmond strives to be to the most appealing, livable and well-managed community in Canada. Our Award Winning City has been the recipient of numerous awards for management and innovation. See the latest Annual Report for more information about the City's achievements and financial management.

Health and Longevity
According to a recent report by Statistics Canada, people in Richmond, BC still have the longest life expectancy in Canada. People in Richmond are living an average of 85.7 years, more than four years longer than the national average of 81.1 years.

Public Amenities
Richmond is known throughout the Vancouver region for its quality Parks, Trails and Cycling Routes, Recreation and Community Centre facilities and its Arts, Culture and Heritage facilities.

Richmond has 871 hectares (2,153 acres) of park land, 136 kilometres of park trails and 87 kilometres of on-road cycling paths. An extensive system of 140 parks provides sports and recreation amenities in every neighbourhood in addition to a wide variety of recreational amenities, including pools, arenas, community centres, tennis courts, playgrounds, picnic areas, golf courses, lacrosse boxes, running tracks and playing fields all of which contributes to high quality of life in Richmond.

The system of interconnecting perimeter dike trails offers for a variety of recreational opportunities along with scenic views of the North Shore mountains and natural and historic areas. Cultural facilities include libraries, a performing arts theatre, art gallery, arts centre, museums, archives and heritage sites.

Amidst the recent rapid change, the community has continued to place a priority on protecting farmland, preserving its heritage and protecting the natural environment. Among the popular sites for experiencing Richmond's unique environmental and cultural heritage are Garry Point Park with its beaches and estuary habitat, Britannia Heritage Shipyard, Gulf of Georgia Cannery and London Heritage Farm.

Access and Transportation
Richmond is connected to neighbouring Metro Vancouver cities by a series of bridges and a tunnel. There are two major freeways feeding into Richmond, a rapid transit line and two railway lines. Richmond also has two international seaports. In addition, Vancouver International Airport is located in Richmond on Sea Island. See TransLink Transit Services for information about the Canada Line and other public transit information.

To learn more about Richmond, see the Official Community Plan in the Planning & Zoning section under Planning, Building & Development.

Climate
Richmond has a temperate west coast climate. Unlike other parts of Canada, the west coast gets little or no snow most winters, and because of Richmond's distance from the mountains, the average rainfall (1,112.6mm or 43.8 in.) is 30 per cent less than neighbouring Vancouver.

While Richmond does not experience extreme temperatures, weather conditions can change quickly. It's recommended to wear layers.

For more information, refer to the current weather conditions for the Greater Vancouver Region at Environment Canada's Weather Office.