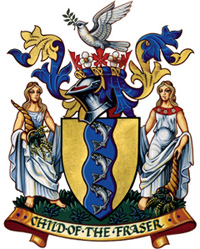 The predominant colours of the shield and mantle are BLUE and GOLD, the accepted colours for Richmond.

The SHIELD is coloured gold, with the wavy pale bar in blue, and three Pacific Salmon thereon in natural colour - silver. The blue bar represents the Fraser River and the delta waters that surround Richmond. The salmon are representative of the most common species that abound in the waters around the municipality. The salmon relate also to the strong historic and continuing association with the fishing industry, responsible for the early prosperity and growth of the community, and very much evident in the present day economy of Richmond.

The CROWN of maple leaves and dogwood flowers relates Richmond to British Columbia and to Canada.

The DOVE rising with the bough in its beak is symbolic of the rising of the land from the water, and relates, of course, to the Bible story of Noah. Richmond was formed from silt deposits and the action of the tides. Also much of it was reclaimed by the early settlers by dyke works. The main islands of Richmond are protected by an adequate system of dyke works, continually being improved and maintained.

The SUPPORTERS represent the goddess FORTUNA, the bearer of prosperity and increase, associated with the bounty of soil and the fruitfulness of women. Fortuna is represented in literature and art as bearing a cornucopia, as the giver of abundance. The sinister supporter (right hand to the viewer) has a robe with a red ribbon around her neck, embroidered with white roses. The red and white are indicative of the colours of Canada and the white roses being in reference to Richmond in Yorkshire which has white roses in its crest. The CORNUCOPIA, held by the supporters is most important to Richmond, in that it has long been the crest of the Municipality and on the official seal of The Corporation. The significance of the CORNUCOPIA is, of course, to the strong agricultural use of the lands of Richmond, a pursuit that brought the first settlers to the area because of the fruitfulness of the rich delta lands. Agriculture plays a great part of in the economy and prosperity of the community and Richmond is well-known for its strawberries, cranberries, potatoes and other produce, and is also known as the blueberry capital of the world.

The green foreground is also representative of the fertile land.

Richmond is indeed a "Child of the Fraser", and the words come from the first line of a poem by Thomas Kidd, a pioneer of the community and one of the signatories to the petition that was presented for the Letters Patent for Richmond.

The BADGE, represents Richmond's relationship to the fishing industry and the sea, and its agricultural background. The wreath of strawberry leaves and flowers also has some significance in that we understand the strawberry plant is also included or represented in the Coat of Arms of Simon Fraser, after whom the river is named.

Please note: Reproduction or use of this Coat of Arms is not permitted without written permission from the City of Richmond.