About the Steveston Tram 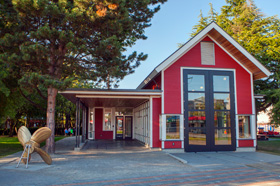 Welcome to the Steveston Tram
Tramcar 1220 is the largest artefact in the City of Richmond’s collection. In 2016 it underwent restoration that took almost three years. Please watch the video below to view the stages of the restoration.

Ted Clark was a passionate photographer of trams, trains and streetcars around the Lower Mainland. He left a legacy of thousands of rail images to the City of Richmond's Archives. Join us for this 2-minute video as we look at some of Ted's images of Tram Car 1220 and how one man contributed to Richmond's history.

If you are interested in seeing more of Ted Clark's images plus others from photographers of interurban trams, visit the City's searchable archive.

Please enjoy this video about the Tram's restoration.

Take a Virtual Tour of the Steveston Tram
For an interactive 3D exhibit tour, click on the link below.
(Works with Google Chrome, Firefox or IE 11+).

A History of the Interurban Tram Line
The rail line on Lulu Island - built and owned by the Canadian Pacific Railway in 1902 - ran freight and passenger steam trains. In 1905, the CPR leased the line to the BC Electric Railway Company (BCER), which electrified the line.

In 1913, BCER added 28 tram cars bought from the St. Louis Car Company in Missouri. Among these was Tram Car 1220, which today is the largest artefact in the Richmond Museum’s collection.

The Interurban line contributed to the development of Richmond’s city centre. The Interurbans and the people who worked on them became an important and cherished part of the community.

The Interurbans did not survive the post-war prosperity that led to an explosion in the number of automobiles on the roads and an expansion of new suburbs not serviced by rail. On February 28, 1958, the final Interurban tram car rolled the rails between Marpole and Steveston, marking the end of a definitive era for the Richmond community and for transportation history in BC.

As of today, there are only 7 BCER operated interurban tram cars left. Of the 28 original 1200 class tram cars from St Louis, five survive today including Tram Car 1220 in Steveston. The other four surviving “sister” tram cars are the 1223 located at the Burnaby Village Museum, the 1235 in eastern Canada and the 1225 and 1231 in Surrey operated by the Fraser Valley Heritage Railway Society. The remaining two cars, the 1207 and the 1304, were both built by BCER at the New Westminster car barn and are also located in Surrey with the 1225 and 1231.

Volunteer Opportunities
Living History Heritage Ambassadors
We are not accepting any new volunteers at this time.

Be a part of the new Living History program at the Steveston Historic Sites!

Be a part of the new Living History program at the Steveston Historic Sites!
As a Heritage Ambassador volunteer share the stories of the people who lived and worked at the four locations-Britannia Shipyards, the Steveston Tram, the Steveston Museum and London Heritage Farm. Volunteers are dressed in period costumes while demonstrating activities that include playing cards, churning butter, sewing, explaining tram car mechanics and much more.

No experience is necessary. Training is provided.

Volunteers will not be acting/in character. Volunteers must be 15+, outgoing, passionate about history and willing to share knowledge and enthusiasm with the public.

The shift times, days and activities vary across sites.

Find us on Social Media!