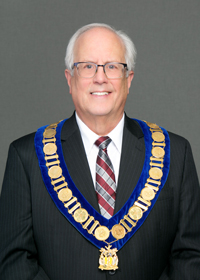 Mayor Brodie has been appointed as First Director to the Board of Directors of Metro Vancouver since taking office in 2001. He has been active on various Metro Vancouver committees. He has represented Metro Vancouver on the Municipal Finance Authority as a Trustee since 2006, Vice Chair from 2009-2015, and Chair since March 2015. Mayor Brodie was appointed by UBCM to the Local Government Policing Modernization Roundtable in January 2022 and previously to the Local Government RCMP Contract Management Committee from 2013-2017. He was also UBCM's appointee to the PRIMECorp Board of Directors from 2013-2014. The Mayor was a Director on the Board of the South Coast British Columbia Transportation Authority (TransLink) from 2002-2007 and served as Chair in 2006-2007. Since then, he has been a member of the TransLink Council of Mayors and was recently appointed as Mayors’ Council Designate to the TransLink Board.

Mayor Brodie is the Chair of the City’s General Purposes Committee and the Finance Committee. In addition, the Mayor is an ‘ex officio’ member of the remaining four Standing Committees of Council.

Before election to Council, Mayor Brodie was a practising lawyer and had a long record of service to Richmond in the volunteer community. In honour of his contributions and achievements in the community, Mayor Brodie was a recipient of the Commemorative Medal for the 125th Anniversary of the Confederation of Canada (1992), the Queen Elizabeth II Golden Jubilee Medal (2002), the Queen Elizabeth II Diamond Jubilee Medal (2012), and the Canada 150th Anniversary Medal (2017).