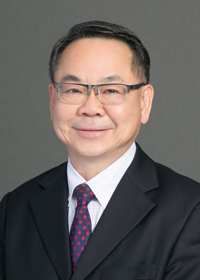 Professionally trained as a family therapist, Chak was an assistant professor at the Chinese University of Hong Kong before moving to Canada in 1988. He has been the Program Leader of the Family and Children Counselling Team of the Vancouver Coastal Health Authority in Richmond for over 20 years.

As a strong advocate of multiculturalism and racial harmony, he assisted and co-founded many local organizations, including the Community Mental Wellness Association of Canada, Richmond GreenSpace Society, Interfaith for World Peace Society and the Canadian International Education Assistance Foundation. In 2019, he co-founded the Stop Racism Alliance Society in response to the rise of racism and hate crime in the community.

He was elected a School Trustee from 1999 to 2011 and served twice as the Vice-Chairperson of the Richmond Board of Education.

In 2006, he was recognized by Vancouver Sun as one of The Hundred Most Influential Chinese-Canadians in BC and received the provincial award of Stand Up and Stand Out for Children and Youth in 2007. In 2012, he was a recipient of the Queen Elizabeth II Diamond Jubilee Award. In 2014, he received the Community Champion Special Award from the federal Canadian Racial Relations Foundation on behalf of the Interfaith for World Peace Society, which he co-founded.

He has also been active in international humanitarian assistance. In 1999, he led Canada's medical aid team to Taiwan after a disastrous earthquake took place in Taichung. He visited Wenchuan, China, after the great earthquake in 2008 and took part in the psychological relief projects for the victims. Since 2009, he has established a project in partnership with the Northwest University for the Nationalities to train social workers and counsellors in China.

From 2009 to 2015, he was appointed Canada's Chief Delegate to the International Eco-safety Collaboration Organization affiliated to the United Nations Economic and Social Council. Through his nominations, Richmond City received the Eco-safety Demonstrative City Award, and Richmond School District received the Excellence in Environmental Education Award at the First World Eco-safety Assembly (WESA) in December 2010.

He was elected as a Councillor in Richmond in November 2011, and reelected in 2014 and 2018. He believes in honest government, transparent decision making, open consultation and citizen engagement. He is committed to bringing the community closer together by building consensus and ensuring that everyone's view is heard even though this may take more significant effort.

He joined the BC government's trade missions to China in 2013 and 2015. In 2016, he led a successful Richmond business delegation to Vietnam. Through his tireless efforts, new direct flight routes between Vancouver and two cities in China (Xiamen and Zhengzhou) were launched in 2016.

He has remained active in the academic field and has been a guest lecturer on cross-cultural communication for many universities in China. In 2016, he was appointed the first honorary professor of University Canada West in Vancouver. He has co-authored several books, including university textbooks, and contributed many articles on psychotherapy, parenting, and personal growth.

To contact the Mayor's Office or the Councillor's Office see City Contacts.