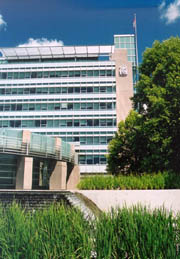 A decade-long vision was realized when the new Richmond City Hall was officially opened on Saturday, May 20, 2000 with a public open house attended by more than 10,000 residents.

The award-winning City Hall opened on time and on budget. More than just a working City Hall, the new facility also incorporates the Meeting House wing, which houses a variety of multi-purpose rooms and open spaces available for rental for diverse public and private events and activities. A large civic plaza with outdoor stage and extensive gardens and other landscaping features also contribute to the welcoming environment which makes the new City Hall a focal point of Richmond's evolving civic centre.

Richmond City Hall is fully accessible for wheelchairs.
Print Back to top