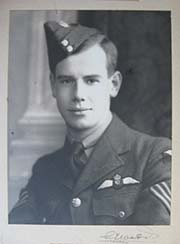 Biography:
John Ansley Foster was the son of Jonathan W. and Frances Louise Foster, of Vancouver BC, and the grandson of Richmond Reeve John Wesley Sexsmith. John's mother, Frances, was born at North Arm and was a teacher at Steveston School.


John's brother, K.W. Foster, served with the Army Medical Corps in Canada, and his sister, Alice, was a nurse in the Hazelton Hospital.

John Ansley Foster was a student at the University of British Columbia for two years after graduation from Prince of Wales High School. A native of Vancouver, he joined the RCAF in June, 1940.

John Ansley Foster was a Flight Sergeant with the Royal Canadian Air Force. He died over Holland December 9, 1941.